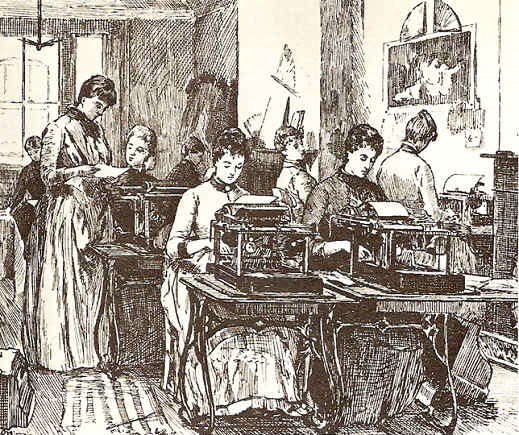 By the early 1900s that school had again become more ambitious for its children. The school had been re-organised by a new and energetic headmaster, and the children were taught with a view to their having a chance of extra prospects in life.

By this date the kind of work available had changed yet again. There were many different kinds of office work, and the coming of the typewriter meant that typists and shorthand typists were in demand by all kinds of businesses. This work was very often done by women, and some of the girls began to undertaken commercial courses. There were also many jobs in printing, generally done by men, and boys from the school began to go into these trades.

Many of the children still came from very poor families. This meant that they would struggle to afford to go on to secondary school or further training. The trustees understood this, and the minute books of this time show that they regularly made grants to school leavers to follow training courses of many kinds – most commonly book keeping or other commercial subjects. On a few occasions it is recorded that they provided support to a former pupils through a university course.

At the end of the Second World War the school became a primary school as secondary education became universal.