Many school leavers became domestic servants – and this could be a good way of getting on in the world. A boy or girl who “went into good service” could have a good, secure job for life. In the very grandest households a boy might become a steward, which meant looking after his employer’s estate, including farms. A girl might become a trained cook or a housekeeper, which might mean looking after a big, grand house and supervising twenty or more servants. And even those who did not rise to such heights could still live well. And in some cases, a servant would be expected to serve in the family’s shop. 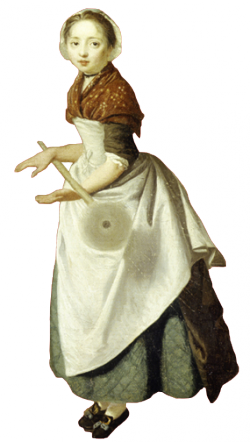 Only young people who were “presentable” would get this kind of chance. Being able to read, write and add up were important, as were having good manners and looking good. And part of looking good was having the right clothes.

In 1753 Mary Blakeridge found a job with a family in Water Lane. She would anyway be allowed to keep her school clothes, but also asked for 16 shillings (the equivalent of a week’s pay for the school master) to buy “necessaries of apparel” – extra clothes. Without these she could not have the job, as the family expected their new servant to do them credit. The trustees agreed to this because her mother had recently died and her father was very poor and had several other children.

None of this was unusual – women servants were not usually given a uniform at this time. However, they were expected to look good and dress well so as to be a credit to their employer. It was only men servants such as coachmen and footmen, who would be seen in public, who were dressed in a livery at their employer’s expense.