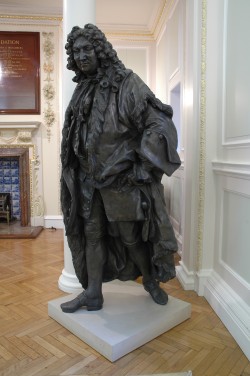 The statue of Sir John Cass is our chief piece of evidence for this.We know from the minute books that it was made more than thirty years after he died. The trustees talked to the sculptor about what they remembered about how Cass looked and moved.

When the statue was finished the trustees were very pleased with it and said it was a good likeness. But they were relying on memories from long ago. And in commissioning the statue, they were intending to honour Cass’s memory in an appropriate way – which “Mr Roubiliac” would have understood. The statue was designed to be placed on a plinth on the school building, and to impress all who saw it.

So the statue gives us lots of evidence about how Cass was regarded thirty years after he died, and how those people wanted him to seem, but perhaps less about what he really looked like.

Our other image of Cass is this cartoon. We don’t know whether the artist had ever seen Cass, but it is interesting that in both the cartoon and the statue, he has his hand on his left hip – perhaps this was his favoured pose. And in both cartoon and statue he appears self confident, perhaps slightly aggressive, and with an air of straightforwardness and determination.