What has survived to tell us about Cass and his school?

We are lucky that, over the changes and chances of three hundred years, so much evidence about Cass and his school has survived. 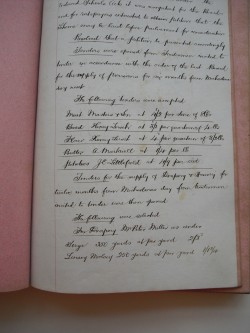 Starting with the earliest days of the school, the trustees held a committee meeting every two weeks for several hours, and everything they decided was written down in a large minute book.

The books were obviously carefully kept, and must have been very hard work to write with a quill pen and ink. There are few blots or crossings-out. It is likely that these are the “fair copies” – whoever was taking the minutes would have made notes at the time in rough and copied them into the book later on.

In the early years, the trustees discussed and organised everything to do with the school – the teachers were not allowed to make many decisions for themselves.

In particular they were not allowed to decide about the children’s food. So we know how much butter and milk a week – nine pounds and fourteen gallons respectively – were bought for the school children in 1750.

And the trustees discussed every detail concerning the children’s school clothes. So we know that the school badges the pupils wore were made of copper and cost eight pence each in 1749.

Every time there was a vacancy for a boy or girl to attend the school, the trustees took it in turns to choose. The minute books tell us who was picked and by which trustee – so we have the name, address and age of each new girl or boy.

But we know little about how the children were taught – the trustees did trust the teachers to plan the lessons, and so nothing about this aspect of the school is recorded. 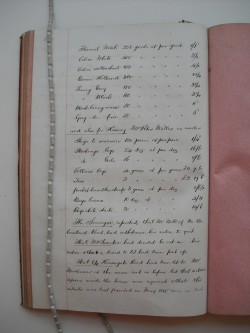 The minute books are full of information – but it is very difficult to look for one particular kind of information, as the books are not indexed. So anyone interested in finding out about the early days of the school has to settle down for many hours’ reading, and has to be prepared to be read about all of the school’s life plus the details of how the trustees looked after the property that paid for the school.

However, we know about any of the children who were in bad trouble. The head master and head mistress complained to the trustees of any pupil who was often absent or who behaved very badly or who arrived at school dirty. All these things happened frequently, and it was the trustees who decided on what should be done.

For these early years, reading the minute books and the few other books that were kept is almost the only way we have of finding out about the school. There were no inspections or reports. And because this was long before the days of cameras, there are no photographs of the children or their teachers.

Besides the minute books, just a few other books and letters were kept. Most things were thrown away, but there is a “late book” kept by the head master, and a collection of copies of the hymns that were written for the children to sing on special occasions. It is probably by sheer chance that these few items were kept for so long that they had become interesting.

We do have other information about some of the trustees if they were rich and powerful enough to be written about elsewhere. For example, Sir Crisp Gascoyne was one of the trustees as this time. He was also a rich brewer, and was Lord Mayor of London in 1752. He was so important that he had his portrait painted, so we have some idea of what he looked like.