Statues, portraits and a loving cup

Not long after the school re-opened, the trustees

“resolved that it be referred to the Treasurer to prepare a statue of Sir John Cass to be made by a skilful artist in such manner as he shall be advised and that the same be erected in the niche for that purpose in the front of the said school”.

They chose “Mr Roubilliac” – Louis François Roubiliac, a famous French sculptor who had moved to London. When the statue was being planned, “such of the trustees present who remember Sir John in his lifetime gave Mr Roubilliac the best description they could of Sir John’s person”.

When the work was finished, the trustees who had known Cass were all very impressed by the resemblance. So we can be fairly sure that the firm stare, the determined tread, the hand on the left hip (this is the same stance as the figure of Cass in a political cartoon published during his life) and the expensive, slightly untidily-arranged clothes are all true to life. 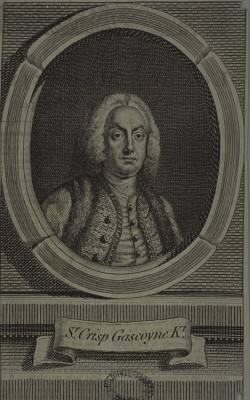 The trustees sometimes also took steps to commemorate themselves – they commissioned a portrait of Sir Crisp Gascoyne, who was one of those who had worked hard to get the school re-opened, and over the years there came to be a tradition of making pictures of long-serving and important trustees. There is a collection of them in the Cass Foundation office today.

Every year at Founder’s Day a toast is drunk out of a very special cup. This is the loving cup made in memory of Jeremy Bentham, another of the first Trustees, who served for more than sixty years. Bentham was a most energetic man who believed that “pushing was the one thing needful” in life, and who achieved much, and whose son Jeremy helped to found University College, London. Bentham left the silver cup to the Charity in his will, and it has been used every year since.