The red feather is probably the most famous image associated with Sir John Cass. There is a huge metal red feather now on display on the wall of the school building. And every Founder’s Day every guest wears a red feather to honour Sir John. 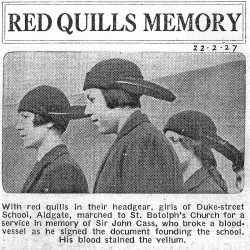 Most of the people, child and adult, associated with the school, can tell you the story. How Sir John Cass wanted to change his will so as to make sure the school could carry on after he died. How he knew he was dying and tried desperately to sign every page of the will in time. How he was half way through but was stopped by the haemorrhage that killed him with violent suddenness, leaving his quill pen, made with a white goose feather, red with his blood, leaving half the will unsigned, and leaving thirty years of legal arguments before his school was finally made safe for all time.

And we are sure most of that story is true. It is also true that there is no mention of the bloodied feather in any of the records for at least two hundred years. The Georgian and Victorian children who processed through the streets to Founder’s Day wore their best uniforms, but no red feathers.

It is true, too, that during the legal battles over Cass’s will, several people who were in the house when he died made sworn statements about what happened. Rebecca Hyde, a neighbour, had been sent for to witness the new will, and said in her statement that Cass had signed two sheets of the will, drunk a glass of sherry, and then asked to be moved to a different chair so as to be able to sign the other four pages more easily. Mrs Hyde and Benjamin Smith, another neighbour, helped him to move and both said he died very suddenly as soon as he sat down. Neither mentioned either his having a pen in his hand, or the appearance of any blood.

The first time we know of that anyone mentioned the bloodied feather was when Sidney Farthing, who became headmaster of the school in 1896, gave a historical talk. In it he told the story of the half signed will, including the detail about Sir John Cass’s blood soaking his quill pen. Mr Farthing did not say where that idea came from, neither did he leave any written evidence we know of. So it is impossible to be sure whether there is any truth in that new part of the story. It is possible Mr Farthing had some evidence no one else had found. It is also possible either that he made it up or that someone else had made it up and told that version of events to Mr Farthing. We will never know. What we do know is that it’s an extremely dramatic and memorable story, and soon became the version everyone believed.

By the 1930s the children of the school were being photographed wearing feathers in their hats and lapels on Founder’s Day. By that time the red feather had become the symbol of the school, as it remains today.