The school that Sir John Cass paid for and set up in 1710 was not on the site of the present school, and did not look anything like it. Sir John had previous experience in starting up schools; he had contributed to an earlier school, at Little Tower Hill just south of the ward, started by Sir Samuel Starling

Sir John paid for land on Aldgate High Street, right next to St Botolph’s Church, on the corner of Church Row, to build his school. 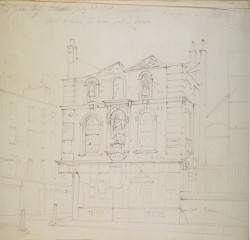 A building was commissioned which had shops on the ground floor, the schoolroom on the first floor, and burial vaults underneath. This was not unusual for the time, and the idea was that the income from the shops and burial ground would help to pay the costs of the school. This was the school that the first 50 boys and 40 girls came to in 1710. It was not the first charity school in the area – a man called Sir Samuel Starling had set one up on Little Tower Hill twenty years earlier, but it was to be the only one to last to the present day.

The school building was made of brick, on arches that formed a walkway over the shops on the ground floor. It had tall windows, and on the front three niches: one on the first floor which after 1752 held the well known statue of Sir John by Roubiliac, and two smaller ones just below the roof level which had statues of a boy and a girl in the school uniform 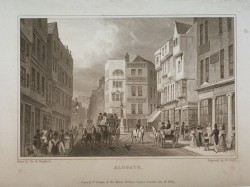 The school up and running well by Sir John’s death in 1718, and despite legal arguments, it continued to run until Lady Cass’s death in 1732. After that it opened and closed several times until it was finally opened again in 1748, largely thanks to the effort of Sir Crisp Gascoyne, who was the treasurer of the Charity, and would be Lord Mayor in 1752. The school was re-opened in the same buildings, and extra space was hired in the Aldgate itself to be a dining room for the children, and for some of the staff to live in.