In the early days of the school the only prizes were for good behaviour. If a pupil got to the end of his or her school days, they were allowed to keep their school uniform, and given a small sum of money to help with the start of their working life.

By the beginning of the Victorian period, leavers were being given a Bible, prayer book and address (this was probably a copy of a sermon), and there were prizes for good work in various subjects. 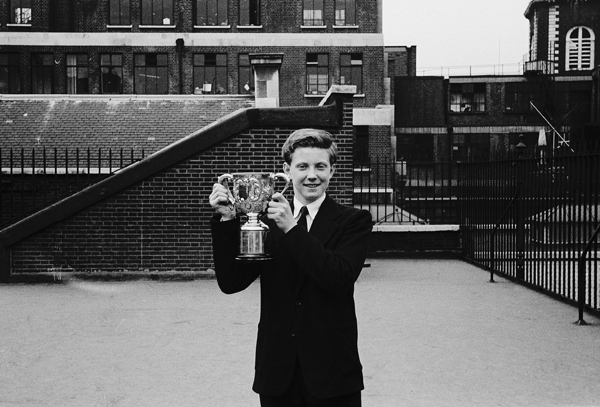 The results of this were not always happy – in 1852 a Mr Nicholls removed his son from the school because he had not been awarded a prize.

Special subject prizes were added as the century went on, and various annual cups and medals were added.

When the school was evacuated to Aylesbury during the Second World War, Founder’s Day was held at the local church, the children continued to receive a prayer book and Bible on leaving school, and, to begin with, prizes were given as usual. But in 1941:

It was reported that the Headmaster had forwarded a request by the children of the Foundation School evacuated to Aylesbury, asking that the money usually expended on school prizes, amounting to £19 5s, should, for the year 1941, be sent to the Minister for Aircraft Construction towards the cost of a Spitfire Aeroplane”.

This was done, and the minister, Lord Beaverbrook, sent a letter thanking the children for their contribution.

During the Aylesbury years the children were taken on some visits, including a day trip to Whipsnade Zoo, a few miles from the town. In wartime it was difficult to go far afield, as petrol was rationed and trains crowded and often cancelled at short notice.