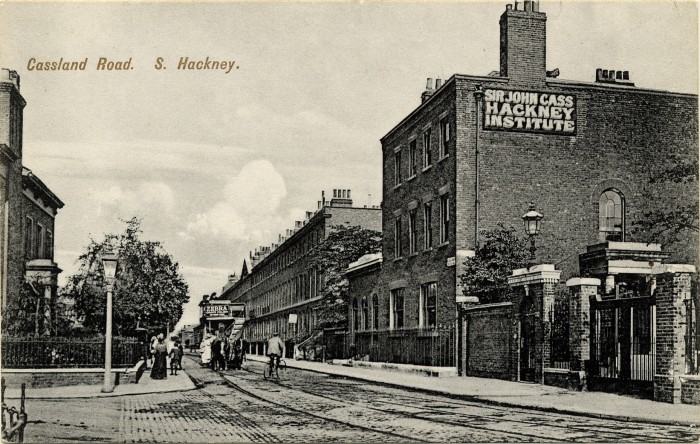 By 1897, Hackney was a densely built part of London. On the Cass estates in south Hackney, there were streets named after trustees and treasurers of the Cass foundation – Cassland Road named after Sir John himself, Gascoyne Road after Sir Crisp Gascoyne who had done so much to keep the school open after Cass’s death, and Bentham, Annis and Christie Roads all named after influential treasurers. Some of the estate had been purchased by the LCC to create Victoria Park.

In the north of the area, the Loddiges Paradise Fields had closed very suddenly in the 1850s, and by 1897 the Great Palm House was gone and the whole area was built over. A railway arrived in 1850, and trams in 1882, allowing people to travel in to the city for work. This was happening all over Hackney. It was so close to the City that it was ideal for building, but because so much of it was built in small blocks, a lot of the housing was small or subdivided. The richer people who had lived there in the eighteenth century moved elsewhere and people who worked in all sorts of jobs in London moved in.