A City Politician – and a Jacobite?

In some respects, taking part in City politics was expected of someone of Cass’s influence and status in his Livery company. And at that time being an alderman, sheriff and, most of all, Lord Mayor, meant having considerable power. For example, an alderman could order the arrest of anyone they suspected of wrong doing..

But Cass’s progress through the City hierarchy was very far from smooth. This was because of his political and religious sympathies. There were only two political parties at this time, the Whigs and the Tories. Each had a group in Parliament and allies in the Church of England, the Royal Court and the City of London. There were also many sub-groups, plots and changes of friendship. For the most part the Whigs were sympathetic to Nonconformists and the Low Church – this meant they favoured simple church services, and would consider allowing members of other churches outside the Anglican church to have jobs and influence. And for the most part the Tories favoured the High Church, with its emphasis on ritual and formality. Most Tories had little sympathy with nonconformity. Some Tories had sympathies with the Roman Catholic church, and some of these wanted to bring back the exiled James II’s son, the Catholic Old Pretender, and make him king. These people were known as Jacobites.

At this time politics was a very violent business, and candidates for election would often organise street fights between their rival followers, and it was common for a candidate’s allies to pay members of street gangs to take their side.

John Cass was a High Tory and a High Anglican, as was his father before him In the 1690s when Cass was still quite young and his father still alive, there was a serious attempt to assassinate King William depose Queen Mary and bring back James II as king. Chief among the plotters was Sir John Friend, a business associate and friend of the Cass family. When the plot failed, Friend was arrested at the Cass house in Hackney. Friend was executed, but Thomas and John Cass not only successfully argued that they had only been helping out a neighbour, but also claimed back the huge sum of £1,300 they had lent him. But all through Sir John Cass’s life, it was whispered that he had Jacobite sympathies. On the cartoon the caption next to him is “No Perkin”, which means no Jacobite. 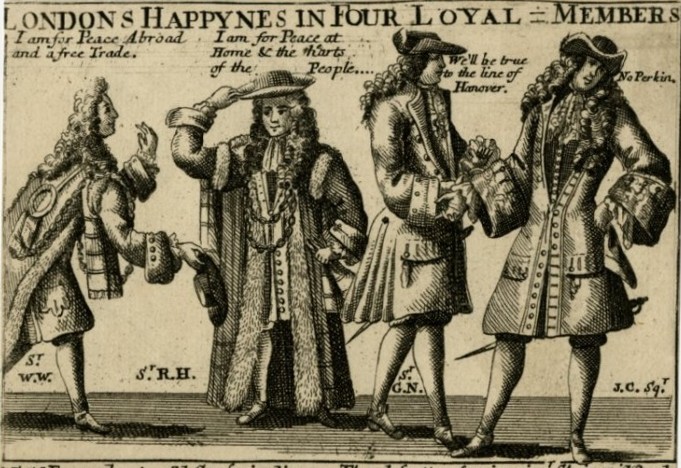 John Cass was deeply involved in both City and national politics all through his career..

So when Cass became a candidate to become a City Alderman, the Whigs, who were then in a majority in the Court of Aldermen, were determined to keep him out. It was to take four attempts before Cass was accepted. In the process, Cass became something of a celebrity. This was because at this time his friend Dr Henry Sacheverell was put on trial because he had annoyed the government by speaking against them at the opening of the new St Paul’s Cathedral. During the packed trial at Westminster Hall (everybody who was anybody attended, including the queen) there were pro Sacheverell riots. Several buildings were burned and the Bank of England attacked by mobs chanting “High Church and Sacheverell”. Sacheverell was forbidden to speak in public for three years and the offending sermon was publicly burned, but Sacheverell, and Cass with him, had become popular heroes.

It was as part of his campaign to become Alderman that Cass decided to set up his school The opening took place in a blaze of publicity, and was attended by a number of lords, many rich City businessmen, and Dr Sacheverell. Especially among Tories, who had the support of most of the poorer people in the City, it was usual for political candidates to give generously to charity, and to make sure everyone knew about it By this time Cass’s fourth attempt to become an Alderman had been successful, and he had become both one of the MPs for the City and something of a celebrity Within a few months he had also been elected Sheriff.