John Cass was born in Rosemary Lane, near the Tower of London, on 20th February 1661. He was the only son of a successful carpenter, Thomas Cass, himself the son of an innkeeper, and his wife Martha Johnson. The baby John was born into a prosperous household, as Thomas had made a lot of money, most of it not from working with word in any form, but from contracts to supply stores and supplies to the navy and to military garrisons as well as investing in building schemes.. So we can be sure that their home was comfortable and well-furnished, and that the only child had everything he could want. 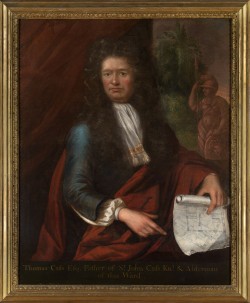 In 1665 the family moved to Hackney, which was then a country village where property was cheap and the air healthier. It was a well-timed move, as later the same year the Great Plague visited London, killing over 7,000 people in one week alone. The Cass family was at a safe distance from this danger, living in a newly built house, grand enough to be described as a mansion, and surrounded by 70 acres of farmland, a garden and stables.

But Thomas Cass’ business interests were still in London, and he had a house in the Minories as well as the estate in Hackney. The young John was educated at home by a tutor, probably spending most of his time in Hackney. Martha Cass died when her son was still a young boy, and Thomas soon remarried, choosing a rich widow as his second wife.

As soon as his son was old enough, John was apprenticed to a carpenter, and was soon working alongside his father, to whom he was to remain close. While it is highly likely neither of them ever worked with wood, they were both important members of the Carpenter’s Company