Clothes for the school children

When Cass first planned his school he proposed to give each pupil a yearly allowance of £20 for “cloathing, diet, lodging, books and other necessaries”. But this would have been impossibly expensive for the 50 boys and 40 girls he finally decided to include. So the instruction in his will was for all pupils to be provided with an outfit of good quality blue cloth each year. In very many cases these would be the first decent clothes the pupils had ever worn, so it was generous and practical to provide them. It was also sensible, as it meant that school leavers would have good clothes to wear when they went to their new employer. 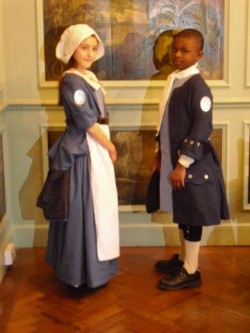 These pictures show children wearing clothes made to look as much as possible like the ones described in the minute books and shown on the statue. The materials used are wool, linen and leather – it was illegal to wear cotton at this time.

The trustees interviewed tailors who had applied for the contract to make the children’s clothes and selected a Mr Savage, who had made the cheapest offer – 19s 6d for boys and £1 for girls. However, a few weeks later 17 shifts and 15 aprons were returned as being substandard, and he did not keep the contract for long. At this time, £5 a year was a decent wage, so the value of the uniforms was considerable.

It was not long before the trustees decided to set the school mistress and girl pupils to knitting the stockings that formed part of the uniforms, and it was no long before the girls were being expected to sew shifts and aprons for themselves and shirts for the boys as well. The stockings were made of worsted wool, and must have been scratchy. The trustees then proceeded to cut the amount of time the girls spent learning to write so that they could concentrate on sewing.

But many of the jobs available to girls at this time involved sewing. For example, two of the very first girls to attend the school were apprenticed to a mantua maker and an artificial flower maker when they left.

The clothes provided for the schoolchildren were simple, but of good quality. Only pupils who left to go to an approved job or training were “given leave to take away their cloaths”. It is a sad reminder, both of the frequency of early death and of the value of the clothes, that when a pupil named Mary Pinks died in 1751 and her mother returned her uniform, the trustees promptly reused the clothes for the new girl, another Mary, who took the dead child’s place.