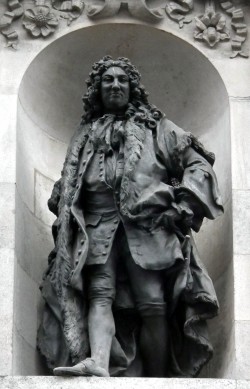 Although this statue of Sir John Cass was made more than thirty years after he died, it is probably recognisably like the man, although designed to flatter and be impressive. The long curly wig, expensive-looking but rather untidy clothes and determined stride are probably true to life. The neckcloth is loosely tied, and the elegant garments pushed aside by Cass’s apparently favourite pose, his left hand on his hip

Almost certainly the only three fabrics Cass ever wore were the best wool, silk and linen. The controversial new cotton fabrics were fashionable and cheap, but it seems unlikely they would have appealed to him. Certainly he specified wool for the children in his new school. At the end of his life, the fashion for a man of his standing would mean he would wear a curled wig made of human hair (cheap ones were made of horsehair) over his shaved head. His shirt would be of fine linen, his breeches of heavy linen or wool, his waistcoat probably of embroidered silk, with a heavy, lined, pleated coat made of wool for everyday or silk for grand occasions. Stockings could be silk or wool, and his shoes were high-heeled. Cass would certainly not leave the house without a hat, cane and sword.