Sir John Cass wanted to make sure the schoolchildren were fed. But he would almost certainly have expected very different food for himself and his wife.

Starting with breakfast, Sir John Cass probably had a choice of cold beef and ham, bread and ale or beer . Few people drank tea or coffee that early in the day. But ladies often drank chocolate in the morning. Lady Cass may well have had breakfast in bed, brought to her by a servant – hot chocolate, and fresh white bread rolls and butter and honey. No grand lady would eat wholemeal bread, which was cheaper and regarded as only fit for servants. The “traditional English breakfast” of bacon and eggs was not yet the fashion.

The main meal of the day was dinner, usually served in the early afternoon. The Casses, like other well-off people, would have several different dishes, mostly meat and fish.

Here is a sample menu of the time for a “small dinner”, to be served in early summer. It comes from one of the many recipe books of the time. 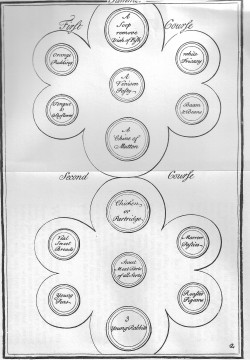 A soop, remove dish of fish

A chine of mutton

Sweetmeat tarts of all sorts

(This is a fold-out section in the book, and gives the plan for the table for each course)

In among all the meat on offer at this dinner, there are some vegetables mentioned – the first course cauliflower, to be served with the tongue. The beans to go with the bacon were of the haricot kind (like baked beans). The second course offers five meat dishes – the marrow pasties are bone, not vegetable marrow – and one vegetable dish. This is very typical. For the well to do, seasonal vegetables such as these peas were a delicious treat, but not really serious food. This still applied to potatoes at this time: new potatoes were an expensive delicacy, chips were not invented and potatoes certainly did not appear every day.

Sweet dishes were fashionable, expensive and a great way of impressing your dinner guests. Skilful cooks made jellies, trifles and cakes in bright colours and complicated shapes.

There would certainly have been wine to drink with all this – probably French claret or burgundy. The meal would not end with tea or coffee – these were available, but still very expensive. Lady Cass might well have a tea table in her private sitting room; coffee was usually drunk in the coffee houses that had opened all over London.

The last meal of the day was supper, served in the mid-evening (later in grand society). There were usually fewer dishes to choose from, but Sir John Cass would certainly expect another good meal.

Better-off people ate very well, and in large quantities, in the eighteenth century. As in earlier times, the richer you were the more meat you would be likely to eat. And fashionable clothes for men were designed to look good with round stomachs and well-covered shoulders. Women wore corsets to make their waists look slim, but aimed to look plump everywhere else. It was fine to have a double chin – only the poor or the ill were thin.