Food for the poor 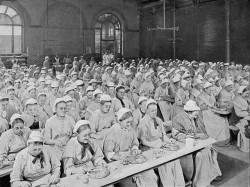 The poorest people lived on little but bread and soup and cheese. For example, a porter and his family would spend about two thirds of their income on food and drink.

And of course, a poor family in London could not grow their own vegetables or keep a cow or chickens – they were dependent on shops and markets. Also, living conditions for the London poor meant overcrowding. Very many people did not have a proper kitchen – if they were lucky they might have an open fire in their one room, If so, they would be able to make soups or stews in a pot over that fire.. They would be unlikely to be able to afford much meat – perhaps an occasional piece of fatty bacon to add to the pot.

There were many workhouses in London, and in these the old, orphans and the unemployed would be given food and shelter. Although workhouses were not the harsh places they became in the 1830s. many people preferred starvation to asking for help, which was in any case only available in their home parish and after answering a lot of questions. There are records in many London churches of the parish paying for the burial of an un-named stranger found dead in a local doorway.