A hundred years on

London changed hugely through the nineteenth century, and Portsoken changed with it. By the 1860s all the green fields were gone, swallowed up with industrial buildings and housing as far as Bromley by Bow and Stratford in the east. Almost every green space, except for some churchyards, in and near the ward, was built over. There was an enormous railway terminus at Broad Street (now Liverpool Street Station) bringing thousands of workers into London from further out, a London spread and spread. Buses and trams also brought thousands of workers into the City every day.

Some things had changed for the better; streetlights were now the responsibility of the local authority, and were lit from dusk until dawn by law, and all the huge hanging signs had gone, so the streets were better lit at night. All main streets were paved and cleaned from time to time, though the smaller alleys and courts might not be.

But a bigger London meant more and more people, all cooking and heating their homes, mostly with coal. London became notorious for being foggy and smoky: visitors complained that you could not get a good view anywhere because of the smoke that always hung in the air. There was no London wide sewage disposal until the 1870s, so the whole City often stank, and there were serious outbreaks of cholera (a disease carried in dirty water) in the 1830s to 50s 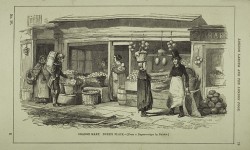 The layout of the streets in the Portsoken ward had not changed very much, but where railways (and later undergrounds and bigger roads) were being built, people were forced out of houses to make way for the new transport systems, and for the poorest people, that meant moving into even more cramped accommodation than before.

Records of the time show whole families living in one room in a divided up house in a small, cramped, court. For the very unlucky, there was the threat of the workhouse, where you could be forced to go if you had no work or money where families would be split up and anyone over the age of 7 forced to work at dirty and exhausting labour.

‘The poor are displaced but not removed. They are shovelled out of one side of the parish, only to render more overcrowded the stifling apartments in another part… the dock and wharf labourer, the porter and the costermonger cannot remove.’ The Times 1861