If Sir John Cass went for a walk along Houndsditch in 1710, he would have seen a very different street to the one we know today. The Fire of London had not reached so far east, so the street would still be a mixture of old timber framed houses, many of which would be built out over the street, and newer brick houses, the tallest of which might be four or five floors high. Brick buildings had become very fashionable, especially for richer people, in the seventeenth century. Little dead-end streets or ‘closes’ ran off the main road: this is where most of the children who would come to the school lived. House front doors opened directly onto the street – there were no front gardens, but occasional little green areas between or behind the buildings.

Houses were not numbered, so more important houses and businesses had huge hanging signs outside the front door, above people’s heads; some still exist in Lombard Street. This made the street even darker and more tunnel-like, and shopkeepers and householders only had to put lights in the street until midnight, so part of the night was very dark. 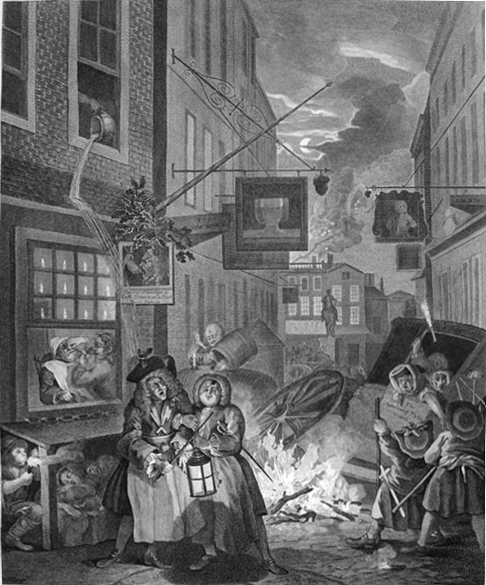 There would be shops and coffee houses on both sides of the main road, and although the street was not well paved or well looked after, causing mud to be churned up by passing horses and carts, people came round every night to take away the rubbish and refuse that householders put out. Rubbish had to be put out in particular places, just like today, and anyone who didn’t obey the rules could be made to pay a large fine.

All the roads were narrower than the present day ones, and there was no organisation to the cars and traffic. Carts, carriages, carrying chairs and people on horseback could travel up any side of the road they liked, which often caused massive hold ups and arguments with nobody prepared to get out of the way for anyone else. There was no roundabout at Aldgate; just a big crossroads with all the traffic trying to get across it first.

Being a main road, it would be bustling and busy all day and well into the evening, with people selling goods from shop fronts. There would be street-vendors, business men visiting each other and discussing business in the coffee houses, ordinary people shopping or going about their business, and children playing or working in the streets and closes of the area, which is called ‘Portsoken’