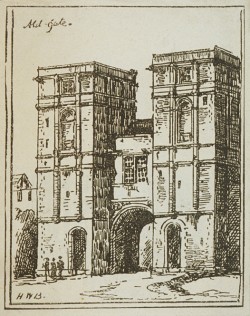 In the sixteenth century, Portsoken was right on the edge of London. There were houses and shops along the big roads, and some old buildings: at Aldgate there was one of the City Bars – a grand gate: in the 21st century a wooden structure has been built on what is now Aldgate roundabout to show where this building was.

Very near to that was the Priory of Holy Trinity. This was closed down in 1532, but is still has an effect on the buildings in the area. There are some remains of the walls in an office building on the corner of Mitre Lane; Mitre Lane runs where the nave (central aisle) of the church was, and Mitre Square is where the church cloister (open area with walkways round it) stood. 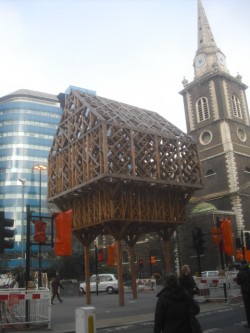 The land to the east was marshy, and not easy to build on, but good for growing fruit and vegetables, to sell to people in the City. But London was beginning to spread; just up the road in Shoreditch, local market gardeners marched into the City to protest that houses were being built on their land, shouting ‘ Shovels and spades! Shovels and spades!’ – they wanted to carry on using these tools for digging the land to grow fruit and vegetables, not see the land built on.

Change was coming. John Stowe, who wrote a commentary of London in 1603 said the area was changing from open fields to:

‘garden plottes, teynter yards, Bowling Alleys and such like from Houndes Ditch in the West so far as White Chappel’

Tenter yards, or grounds, were areas where newly woven and washed cloth was stretched out on big frames to dry (there are lots of Tenter grounds throughout 18th century London) so the area was becoming more of a place where City work went on and less a country area.