It is sometimes said that what the Victorians did not destroy of old London, Hitler finished off. Later critics also added ‘ and the town planners..’ 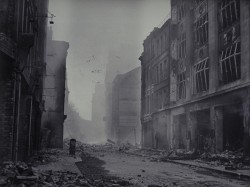 Although the school was evacuated in 1939 to Aylesbury, many children did not stay in the country for long, but returned to their old homes. The City and the east end were seriously damaged by bombing; Houndsditch was hit in 1941, as bombers went for the railways and the industries of the east End

When the school re-opened in 1945, it was to find an area full of craters and bomb sites; mostly the bomb sites had been tidied up, but there were huge gaps in what had been dense building.