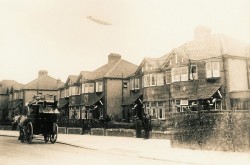 For the children who stayed on in London, life was far from easy. In 1915 the school was taking precautions against air raids including painting skylights and putting up black out curtains. In 1917 the trustees discussed how to protect pupils from day light air raids:

“The Rev J F Marr pointed out that a very safe place of refuge for the children in the event of a daylight air raid could be found in the basement of the School buildings if the six pavement lights in the open play ground were covered over with sand bags…Certain internal windows would also be required to be boarded over to avoid the risk of broken glass”.

So the school prepared its own air raid shelter. Other Londoners took shelter in underground stations and churches. 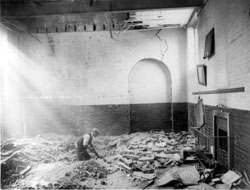 In fact the Cass children were among the luckier ones – the school remained undamaged. Not all schools were so fortunate – on 13th June 1917 North Street School, Poplar, suffered a direct hit during a daylight raid. The bomb fell through the roof of the school, killing sixteen children. The victims were given a military funeral, with a firing party, a bugler and flag-draped coffins. They were being honoured as having died as part of the war effort.

On the same day, a bomb fell on a train standing at Liverpool Street station and another sixteen people died.

Although the bombing was on a relatively small scale, it came very close to the Cass school.