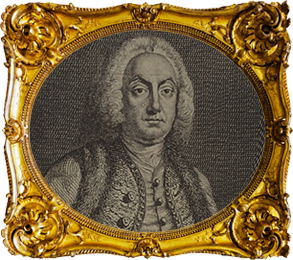 Who? Lord Mayor of London, first

Gascoyne was a wealthy brewer who lived in Gravel Lane, Houndsditch. He married Margaret Bamber, the daughter of a rich doctor, and they had four children .. In 1752 he became the first Lord Mayor of London to live in the Mansion House. As his wife had died, his daughter Ann Fanshaw served as his Lady Mayoress – one of her grand dresses is preserved in the Museum of London. Earlier in his career, while he was an Alderman, Sir Crisp helped to get the Cass school reopened, and then became the first Treasurer of the Cass Foundation – this meant he was the chief trustee, and oversaw the early days of the reopened school. He was in charge of all the meetings that planned, down to the smallest detail, how the school was to be run. Like many rich city merchants, Gascoyne bought a big house and estate in Essex, and it seems that this became his main home. One of his sons, Bamber Gascoyne, became well-known in politics.
We know little about Gascoyne’s early life or how he was educated. He may have attended a City grammar school, but is unlikely to have gone to university. Although we know about his career in City politics, we don’t know much about his life in business, except that he made a lot of money. Gascoyne was a brewer, but as he clearly had a thriving business he is unlikely to have made any ale or beer himself, or to have served any to customers. He would have worked on a large scale, supplying other businesses. As Gascoyne served so many years as a Cass trustee, he appears to have cared about his local community.
Crisp Gascoyne appears to have been very typical of a rich and successful City businessman of his time. He was obviously energetic, as he made great efforts to get the Cass school reopened. It is likely that he had some influence over the care that was taken over how the school was run, and given these qualities it is not surprising that he was so successful in life. He was probably quite traditional in his outlook, as he and the other trustees made sure that the education offered in the school was quite basic, and did not encourage the pupils to aim very high in life. It looks as if Gascoyne was respected by his colleagues, as when he died, still only in his early sixties, they recorded their grief several times in the school minute book.
X