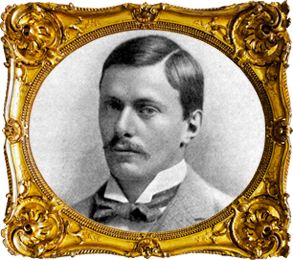 Who? Headmaster of Sir John Cass’s Foundation School from 1896 to 1914

No pictures of Sidney Farthing are known to exist, this is a representation of what they might have looked like
Sidney Farthing became headmaster of the school just as it had survived a serious attempt to close it down. He was only 33 – young for a head teacher – a trained teacher with experience in a state school, and he arrived determined to bring the school up to date. This he set about doing. In only a few years he brought the curriculum up to date, persuaded the trustees not to appoint a new headmistress so he was boss to everyone in the school, and got a number of teachers sacked. After a few years, the standards of learning had improved. Sidney Farthing was also responsible for letting the world know the story of Sir John Cass and the red feather when he gave a talk to a local history group.
We have not yet found a picture of Sidney Farthing. And we don’t yet know what he did after he left the school in 1914. He was fifty-one years old, so he is unlikely to have fought in the First World War, but he almost certainly went on to another job. We then have no further news of him until an entry in the minute book for 1949 that tells us the trustees had been told Mr Farthing had died.
We can guess that Sidney Farthing was idealistic and wanted the best for the children in the school. He was clearly energetic and his methods sometimes seem ruthless, so he was probably tough as well as deterinined. It seems likely he went on to be headmaster of a bigger school.
X