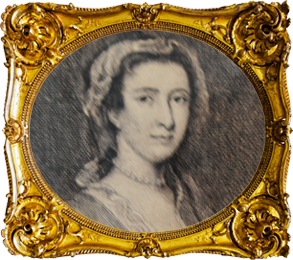 No pictures of Elizabeth Sweetman are known to exist, this is a representation of what they might have looked like
Elizabeth is recorded as being a “near relation” of Sir John Cass, and applied for the post of headmistress of the Cass school in 1733. She was interviewed along with other candidates, got the job, and taught the girls of the school until it was closed down while the lawyers argued about who should have Cass’s money. After that, Elizabeth looked after the school building. In 1748 when the school reopened she asked for her old job back but the trustees turned her down. But they did give her and her husband some money for getting the school rooms ready for reopening, and afterwards found her odd jobs to do. When she became too old to work, she received a pension. And when Elizabeth died, the trustees paid for her funeral and burial at St Botolph’s.
We have not yet found out anything about Elizabeth’s life before she came to the school, how good a teacher she was, or how well she knew Sir John and Lady Cass. We know she was married, but we do not know anything about her husband, or when he died, except that in her final years the trustees referred to her as “the widow Sweetman”. It is unlikely that she had any children who lived to grow up, as it was her landlady who took care of her in her last illness, and the Cass trustees paid for her medical treatment and special food in her final weeks..
It seems likely that Elizabeth was a poor relation of Sir John Cass – unlike other relatives, she was not left anything in his will, so she may not have known him well. It does not seem as if her husband was very successful in life. Elizabeth clearly had enough education to allow her to teach the school girls in the subjects chosen – reading, sewing and some arithmetic. By the time the school reopened she must have been in her late fifties – in the eighteenth century this was considered elderly, and so this is likely to have been why she was not given her old job back. The tone of the references to her in the minute books in her final years suggest that the trustees found her a nuisance, but that they felt they had a duty to look after her. It seems she agreed with them.
X